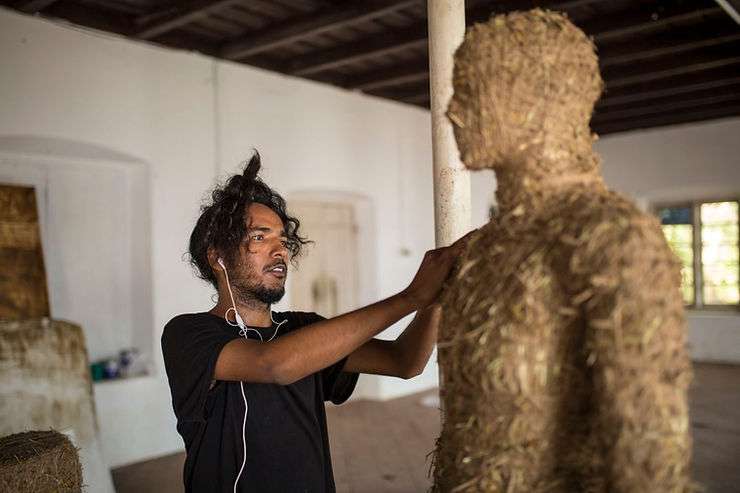 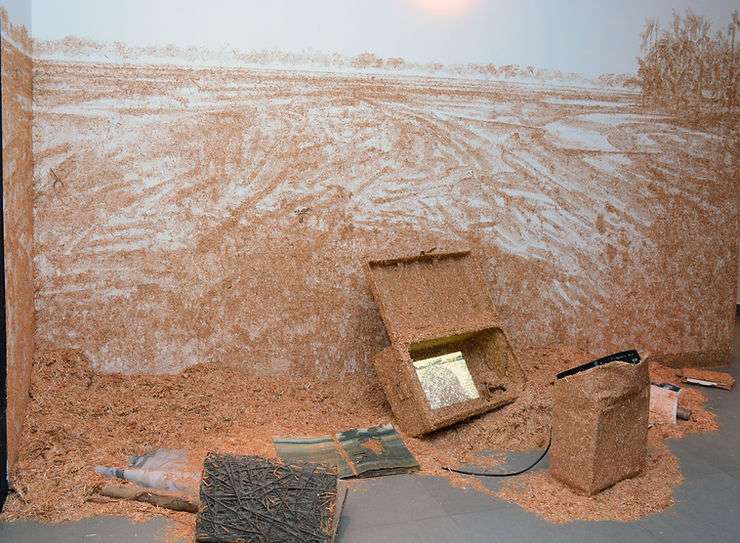 This week, we spoke to artist Dharmendra Prasad, who just completed the Dharti Arts Residency alongside Shazia Salam, Farah Mulla, and Khursheed Ahmad. In our interview, Dharmendra opened up about the inspiration behind his artistic practice, his unconventional views on materials and mediums, and his experience at the Dharti Residency.

What are the important points in time and conceptual junctions which informed and inspired your art practice at large?

After coming out from the art institution, my attempt was to enter into life and everydayness and look for the materials and stories to create forms which stand in time but are ephemeral in physicality and momentary in conceptualisation. I am not so much in love with the notion of legacy and ideas of classicisms and schools. My practice is an attempt to extend the occupational narrative of generations from the position of those who are local and have lived. Therefore my practice is generational not modern, classical or traditional.

I cultivate my practice as a process to reposition myself to create the forms of counter engagement with the time we inhabit today. The human history is the history and the position of seeing the ecology as property; through my practice I see ecology and indigenous philosophies as a library or a book in human history. The ecology becomes the carrier of my practice in which the harvest becomes the philosophical tool and time to realize the forms through which a place, a context or a situation can be created to reimagining the future and think about the tunnels and bridges to liberate art from art and reposition it into the field of life.

What genre would you classify your art works as?

I see my practice as a junction, a receptive, fluid and blurring position which is always in flux and never staged and decorated with the ideas like style, language and meanings in the name of art. I don’t create, I harvest. My practice is about harvesting multiple ideas and knowledge systems which attempt to understand the possibility of rural philosophy as the manufacturer of future life and societies. The agricultural field becomes a studio in which thrashing and sowing of ideas takes place in every crop season where the attempt is made to till up and toil the art practice from the position of the farmer as the artist. It is not a folk position neither the outsider’s romantic position. It is a position coming out of toil, having undercurrents of resistance to counter the categorizations, and partitions which come from a very research driven psychology. Through my practice, I attempt to prepare the field to encounter today’s time

Can you speak about the materials and mediums which you use in your practice?

Working with the different mediums of established art signifies the multiple levels of hierarchies part by part. Working with the modern and industrial tools and with the materials and tools certified by the institutions leads to the breakdown of the ego/identity of the practitioner or vice versa. So the material expresses not only the content, a type of artistic language, form, context and system of art but it also expresses the application of consciously/unconsciously directed hierarchical behavioral patterns towards a practitioner or by the practitioner towards the public which reveals the functioning of power dynamics embedded with the practice. So the selection of medium is not only based on interest but it is a calculative socio-political approach in the context of life/art practice.

Therefore medium is politics, power, and hierarchy. It is the behavioral patterns which are invited by the use of a particular artistic/beyond-artistic medium by a practitioner. The collective social psyche functions at the trajectory point of capital and medium. It is the capital, power and status which define the notions attached with a particular material (medium) and it also define the class and status of a practitioner who practices with a type of medium. If one works in the context which is so called less privileged, then his identity construction and behavioral attitudes towards him/her will be different than the one who practices in a so called more socially and intellectually privileged context (medium).

So a medium and social category goes hand in hand. A medium is beyond the material and a material is not the physical manifestation. A paddy straw or any other crop residues as a materials are social manifestation which grows in the relative dynamics of power, privilege, occupational categories and division of cultural landscapes and social psyche.

What are your thoughts about residency model in Indian context with the experience in Dharti art residency?

For me every residency is a seriously engaged holiday trip, a break from my practice. The Dharti Arts Residency is a residency model which provides a very immersive structure and support system in which one can process the thoughts through the help of well structured residency programming which involves talks and in-depth conversations and interactions with experts in the field and beyond. Dharti art residency becomes a space to learn beyond the academic realm by meeting with different people and going through in-depth processed discussions which I never experienced in Government College of Art and Crafts in Guwahati where I paid money and time to learn.

Dharmendra’s works are on view at the Dharti Open Studio until August 23rd and at the Serendipity Arts Festival. 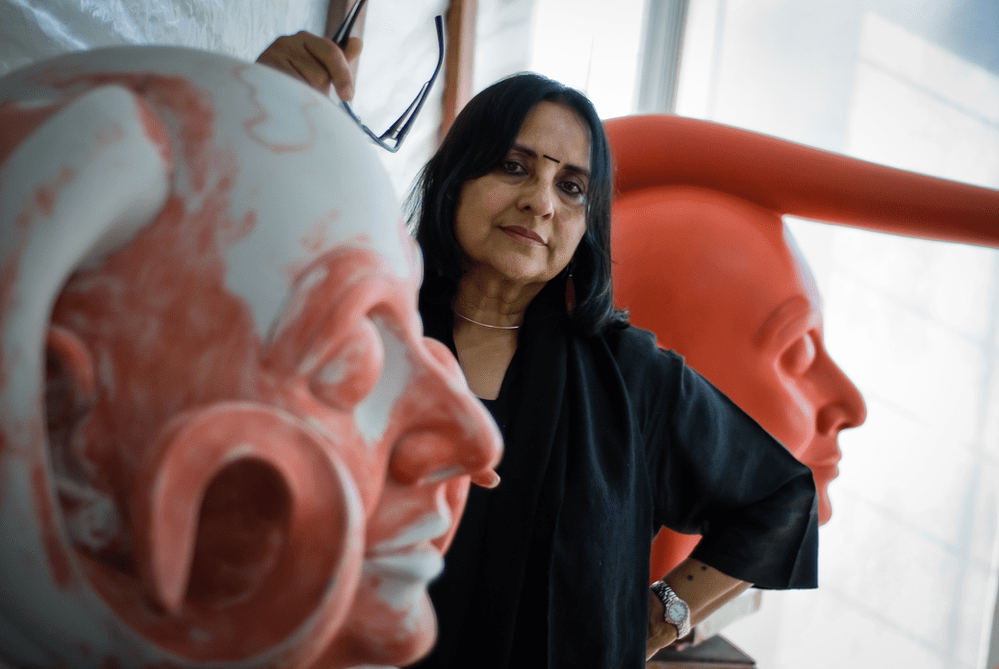 Navjot Altaf on ‘Pattern’: Her First Solo Exhibition in the Arabian Peninsula. 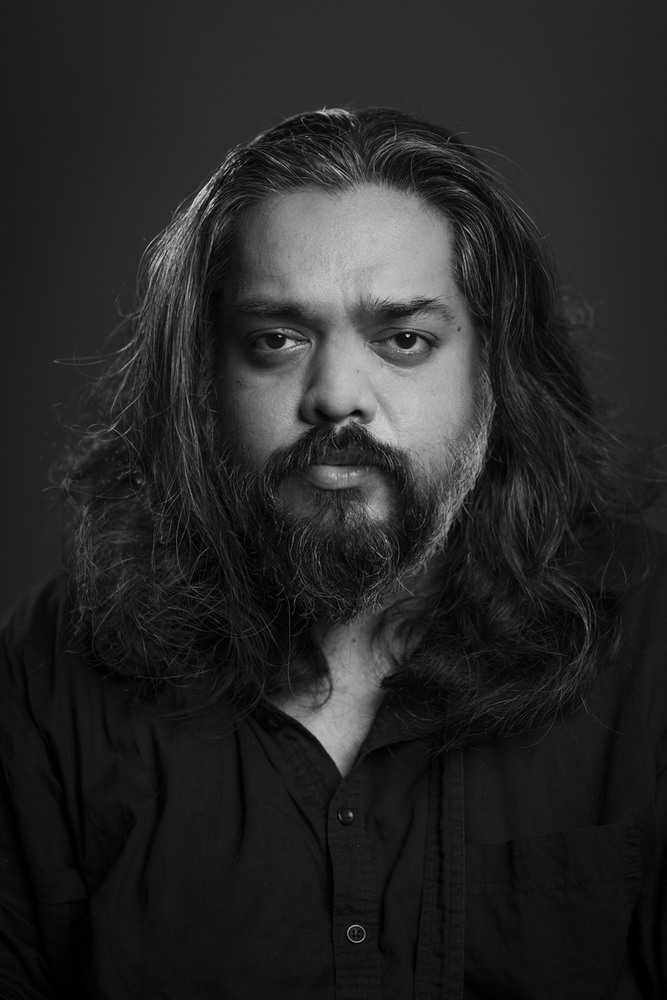 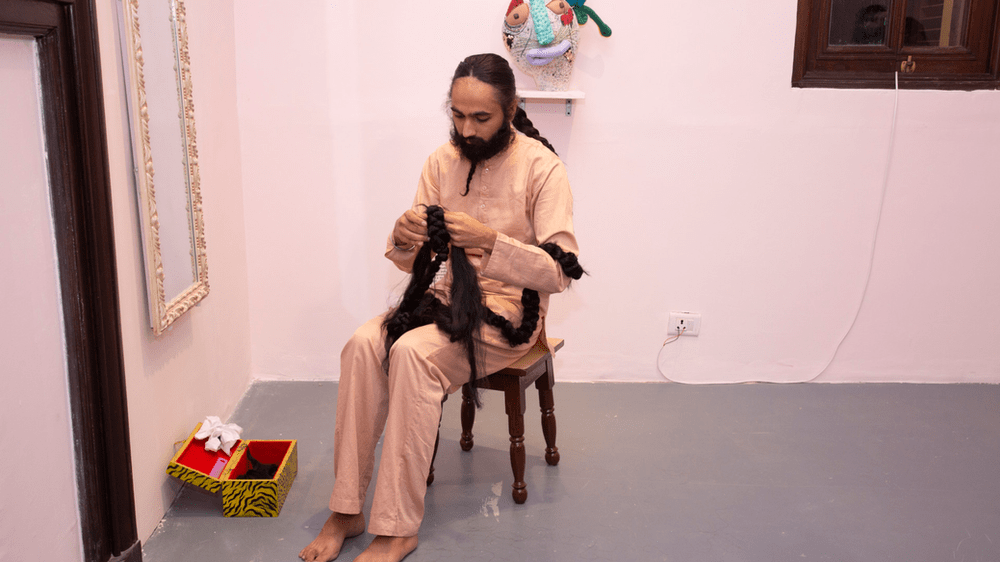 Fantastical Forms and the Magician Who Makes Them