The most famous artworks in the world like the Mona Lisa, The Last Supper and the Starry Night are household names. They’re a part of pop culture now, we’re sure you’ve searched for their posters to be hung in your room! But what about the artworks that sold for the highest prices, in the most prestigious auction houses, with an enthralling audience quietly waiting in anticipation to hear the sound of the auction gavel?

The art market is a place for buying and selling artwork. Auction houses, galleries, dealers and artists are some of the key players in the market. While the art market impacts the artworks in demand being sold at high prices, the vice versa is also true. The sale of artworks, historic or controversial, often sets the precedence for other artworks – increasing interest in art belonging to the same artist or art movement. These sales are responsible for the shift in taste in a dynamic art market. Art Fervour takes a quick chronological tour around some of the most defining sales in the art market!

1. Shifting the Spotlight from Old Masters to Modernist Art

Vincent Van Gogh’s painting “Sunflowers” made in 1889 sold for $39.85 million at Christie’s London in 1987, nearly four times the previous auction high. The auction had 41 Impressionist and modern works with the Van Gogh opening at $8 million, which was quintupled by two telephone bidders within 4 minutes and 20 seconds. The magnitude of this enthusiasm for the painting was unexpected; people had expected the painting to break a record but not of this proportion. The bid was made by an anonymous buyer via telephone on the Dutch artist’s 134th anniversary. The sale shook the art market and encouraged other Van Goghs to come into the market with a much-increased value.

The painting was made during the artist’s last months of life. Van Gogh had hoped to sell it for $125 while he was still alive. This was the first time a modern painting had beaten an Old Master. It changed the tides of demand in favour of newer, modern artworks, paving way for higher sales and reducing the monopoly of Old Masters in the art market. This sale attracted art practitioners, especially collectors and art advisors (who are considered tastemakers of the art world), to develop a serious interest in modern art. The trend of sales thus changed, the art market had evolved in a singular auction – modern paintings could now compete with prices set by the Old Masters!

The most famous direct sale took place at Sotheby’s London in 2008 when Damien Hirst bypassed his dealers, Gagosian and White Cube, and consigned 218 works to the auction house. Hirst intended to do this as an act of democratisation in the art market. He believed that galleries were more intimidating spaces to buy art than auctions – saying that gallerists often indulged with people they already knew instead of developing interest in new buyers. Sotheby’s foray into the primary market with the $200 million auction “Beautiful Inside My Head Forever” is novel even today. It went on to become the most expensive single-artist auction ever. Interestingly, the same morning of the sale, Lehman Brothers filed for bankruptcy, the largest one in U.S. history. Hirst earned $172 million right at the beginning of the 2008 financial crisis with his bold, controversial, and even notorious move.

This led to a new, accepted way for artists to sell their artwork without confining themselves to gallerists and dealers, opening new opportunities for the recognition of artists and newer means for the art market to expand.

In the 18th and 19th centuries, major collections were more likely to be sold through art galleries than an auctioneer since auction houses were not considered prestigious enough back then. This perception vastly changed during the late 20th and 21st centuries. Auction houses are a part of the secondary market – artworks up for auction have already been bought and sold prior. However, auction houses slowly transitioned into dealer territory (which is a part of the primary market) with artists contacting auction houses directly, bypassing their dealer and galleries they’re represented by. By doing so, auction houses earned prestige and became more diverse in their functioning to become a competition in the primary market as well as secondary.

Salvator Mundi by Leonardo da Vinci is the most expensive artwork ever sold at auction in 2017 costing a whopping $450.3 million. Christie’s included the painting in its contemporary art auction. This unorthodox categorisation of the Classical painting led to contemporaries of Christie’s transcending art labels altogether. For example, Sotheby’s included a Ferrari Formula One car in one of its contemporary sales not much later.

The historic sale is a confident precursor to the last Old Master paintings by artists that are in private hands. For example, contrary to popular reports, the last painting by Leonardo, “Madonna of Yarnwinder”, is owned by the Duke of Buccleuch. The art dealer Philip Mould has even gone so far to suggest that he would not be surprised if it sells for $1 billion.

However, many believe that Salvator Mundi is over-restored – Dianne Modestini cleaned it up over a period of 6 years. It was sold for about $60 dollars in 1958. The “sleeper”, a term for an artwork by a remarkable artist that goes unnoticed for a low price and is resold for a significant profit, was marketed as the last painting by Leonardo to come into the market, heightening the interest for potential buyers.

The physics of the orb in the painting has stirred up much debate. The behaviour of light in the orb is not scientifically true. It is now considered to be workshopped with the famous painter’s assistants having painted some parts of the painting. This has inevitably decreased demand and value.

Reminiscent of the controversy and critique on commodification by Marcel Duchamp’s “Fountain”, a urinal, and Andy Warhol’s “Campbell’s Soup Cans”, artwork “Comedian” that consists of a banana duct-taped to the wall that was sold in 2019 with a certificate of authenticity while the owners of the work replace the banana as they see fit. This provocation by Maurizio Cattelan was first going to be a banana in resin or in bronze, but the artist’s ultimate solution was using a real banana.

The suspension of the banana with duct tape with the banana positioned it as a sculpture, not just a commodity that is a work of art. The Comedian made people weigh in their thoughts about whether and how it really is an artwork. While it caused anger among some, it also questioned the meaning of what it means for an artwork to be sold to a buyer and how the definition of artworks will never be set in stone.

5. Racing to the Top of the Chart

The contemporary art boom of the 1980s and 1990s saw the creation of “Rabbit” by Jeff Koons, a stainless steel sculpture inspired by balloon animals – children’s inflatable toys. The artwork was sold for $91.1 million with fees by Christie’s. The auction also included works by Paul Cezanne, Vincent van Gogh, Roy Lichtenstein, Andy Warhol and Lucian Freud. The sale is evidence of the increasing billionaire art collectors in the art world.

The 3-foot-tall silver bunny was cast in an edition of three in 1986 but the others are with collections of public institutions like the Museum of Contemporary Art in Chicago, National Museum of Qatar and the Broad Art Foundation in Los Angeles. With this edition of Rabbit the only one in private hands, it was especially awaited to be up for auction. The astonishing sale has set a trend for contemporary art in the market that is going to only see an uptick for a few years from now.

The COVID-19 pandemic has impacted the global art market in several ways. However, one can only talk about the defining moments of sales and trends of the market in retrospect. With digital art-buying gradually becoming a norm, we will surely see more additions to this list in the next couple of years. While art buying can be directly related to financial investment, aesthetic, emotional and cultural motivations cannot be undermined. The artworld is a constantly evolving landscape that will always see records breaking. 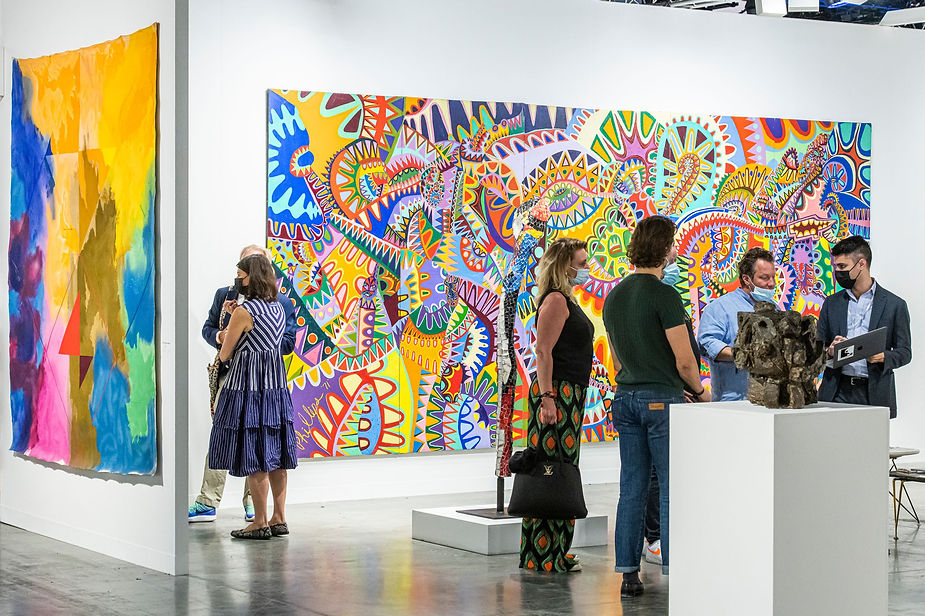 Decoding Biennale, Triennale, and Everything in Between. Where The Duck Are NFTs Headed? 5 Most Expensive Artworks Sold in 2021